Lise
Webmanager
Favourites
On 07 December 2020
It's the perfect gift idea for Christmas. The Athenaeum has prepared its list of books for us.
A book remains the perfect gift for Christmas. It's easy to find the book that your dad or big brother, grandmother or granddaughter would like. And books are gateways to a world of dreaming and escapism. What could be better in these troubled times than to get away from it all? We invite you to escape to Burgundy through a selection of books on our beautiful region reflected and shared by the Athenaeum, a bookstore in Beaune.

Thanks to Anne-Céline for this wonderful list that, come 25 December, will complete your reading list on Burgundy.

Books about Burgundy to give mum or dad

Jean-Robert Pitte
Éditions Plon - €24
From snails to cassis, Morvan to Chablis, “Climats” to marbled ham, Jean-Robert Pitte, a worthy lover of Burgundy, takes us on an erudite tour of the region through its history, specialities, sites, geography and the great figures that have left their mark on the region. A must-read dictionary!
Order on the Athenaeum website

Fred Bernard
Éditions Albin Michel - €25
Fred Bernard takes us into his garden in Burgundy! He describes every day, month after month, through the seasons its winged, hairy and singing inhabitants and, of course, its plants, flowers, trees and vegetable patch... To his watercolours, the artist adds his reflections, humour, anecdotes and memories. A book that’s more like a journey!
Order ont the Athenaeum website

The history of the Dukes of Burgundy: a perfect gift for teenagers

Bart Van Loo
Éditions Flammarion - €29
Half-way between fairy tale and Game of Thrones, don&#39;t miss this saga by Bart Van Loo, the story of the Dukes of Burgundy! A political, military, cultural adventure from Amsterdam to Mâcon, the author takes up the challenge of educating us, over several centuries, through the conquests of this important family in the history of France.
Order on the Athenaeum website

Jean-Louis Thouard
Éditions Faton - €14.50
Philippe Le Hardi, Jean sans Peur, Philippe Le Bon and Charles Le Téméraire ... the great Dukes of Burgundy through the illustrations of Jean-Louis Thouard. Inspired by the work of Georges R.R. Martin, Game of Thrones, the Burgundy illustrator revisits the portraits of the prominent figures of the Duchy of Burgundy with his pop line that fans of heroic fantasy will appreciate.
Order on the Athenaeum website

For lovers of the vine: books in the heart of Burgundy’s lands

Denis Pommier/Antonio Rodriguez
Éditions du Cherche-Midi - €17
Denis Pommier, a winemaker in Chablis, decided in 2008 that his vines would "go organic". Despite the success of this conversion, this return to nature would test him and make him doubt himself: heatwave, hail, mildew ... you have to face the vicissitudes of the weather through sheer hard work. An exciting and touching testimony that reveals the commitment and efforts that go into a bottle of organic wine.
Order on the Athenaeum website

Laurens Delpech
Éditions Flammarion - €45
A portrait of Prince Louis-François de Bourbon-Conti, cousin of Louis XV, who acquired the Romanée vineyard, the future Romanée-Conti. A book full of passion to enrich your knowledge of this mythical estate of Burgundy “Climats” with large extracts from the harvest reports published since 1996 by Aubert de Villaine.
Order on the Athenaeum website

Jean-François Bazin
Éditions Calmann-Levy - €19.90
For the Cruchaudets, coopers from father to son, the barrel is all about know-how, a tradition that helps shape great wines. When in the 1970s, the Cooper’s NVQ was abolished at the wine school, Bénigne Cruchaudet, along with his fellow coopers, took action to ensure oak and barrels triumphed over concrete and stainless steel. A book that pays tribute to the cooper's trade!
Order on the Athenaeum website

Burgundy, land of gastronomy: books to give to gourmets

Bénédicte Bortolo - Photographs: Matthieu Cellard
Éditions de La Martinière - €32
Mustard is a gastronomic emblem of Burgundy. This beautiful book traces its origins, from seed to condiment. It’s also the story of the know-how of Maison Fallot, which for almost a century has continued to make mustard in Beaune. Finally, 40 chefs were given carte blanche to create and put forward recipes based around this condiment, a true piece of Burgundy heritage.
Order on the Athenaeum website

Amandine and Jean-Michel Carrette
€38
A portrait of Jean-Michel Carrette, Michelin-starred chef at the restaurant ";Aux Terrasses" in Tournus, and of all those with whom he works to serve cuisine of which local produce, producers and artisans form an essential part. A book to prolong the pleasure of a meal in this restaurant that we highly recommend!
Order on the Athenaeum website 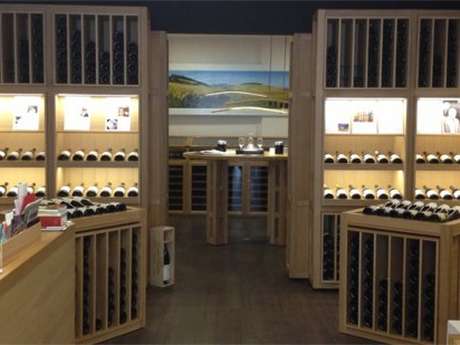 A multicultural space opposite the Hospices de Beaune: the Athenaeum, a paradise for the curious

Visiting the Athenaeum is a journey back through time and space. You can choose to visit the bookstore section, on Place Carnot, and escape into the midst of an exceptional selection of books. You’ll find novels, essays, paperbacks, artworks etc. You&#39;re sure to find the perfect gift for each member of your family.
And if you don't have the soul of a reader who escapes through the lines of books, you can go directly to the tasting shop where burgundy wines await you, opposite the Hospices de Beaune.
And if you want to give a wonderful item dedicated to wine or cooking as a gift, the brands Coravin, Ofyr and Eva Solo will delight your mum or dad. Upstairs, there’s an Ali Baba’s cave that contains the most amazing gifts for children, young and old.

Have a merry Christmas.

For other gift ideas