Of what does it consist and where does this festival come from?

Each year on a freezing early morning in January, a never-ending cortège meanders through the vines. It’s the time of the Fête Saint-Vincent Tournante and Burgundy is full of joy. The celebration commences with a procession, followed by High Mass and a banquet with some 12,000 bottles uncorked. Tournante ? Because there’s a change of village for each edition, to honour another winegrowing appellation and remind people of all the diversity of wine terroirs in Burgundy. The chosen village is active for a whole year, even two, to prepare the welcoming of several thousand people during this memorable weekend.
Why is Saint-Vincent famous in Burgundy? Saint Vincent is the Patron Saint of Winegrowers, honoured since the Middle Ages. In 1938, the Confrérie des Chevaliers du Tastevin winemaker fraternity decided to relaunch this festival, which had become a little worn-out, and this was a great success.

In 2022, it couldn’t be held on the last Saturday in January, as tradition dictates, because of the health situation. It is not by chance if Saint Vincent is celebrated on 22nd January, as it is the moment when winegrowers start pruning the vines again and so it is around that date that this grand festival of the wine world takes place. At its base is found the spirit of solidarity peculiar to village fraternities that had invented a kind of “social security” to help out winegrowers in distress, when sick or victims of the whims of weather. Since then, each village keeps its statue of Saint Vincent, lodged for a whole year by one family. At the end of January, the wine fraternities of all Burgundy meet up in the village designated to celebrate their patron saint. Health crisis, pandemic – but it doesn’t take into account the pugnacity of Burgundians, who never give in and have decided to meet the challenge. So, this festival have take place, on 19th and 20th March 2022 in the villages of Puligny-Montrachet, Blagny and Corpeau.
I won’t keep you waiting any longer…

In 2023, note these dates : Saturday 28th and Sunday29th January. The festivities will begin on Saturday 28th at 7.30 AM in the village of Couchey, with the parade of the 100 Burgundian confraternities, from the Tonnellerie Rousseau. Marching bands from Nuits-Saint-Georges, Gevrey, Quétigny and Marsannay-la-Côte and numerous musical animations will accompany them as far as the village of Couchey.

The programme for Saturday 28th January 2023:
The programme for Sunday 29th January 2023:  Throughout the weekend, wine-tastings (alcohol abuse it dangerous for your health; drink in moderation) are thus offered to visitors: the winemakers of the village open their cellars and offer special cuvees and specific vintages.
Access to the tastings is by purchase of a tasting kit, including 8 tasting tickets, an official glass (engraved with the emblem of the festival edition) and a glass holder. The 2023 tasting kit is at the price of 20€ in the on-line shop for the event and on site the same day. 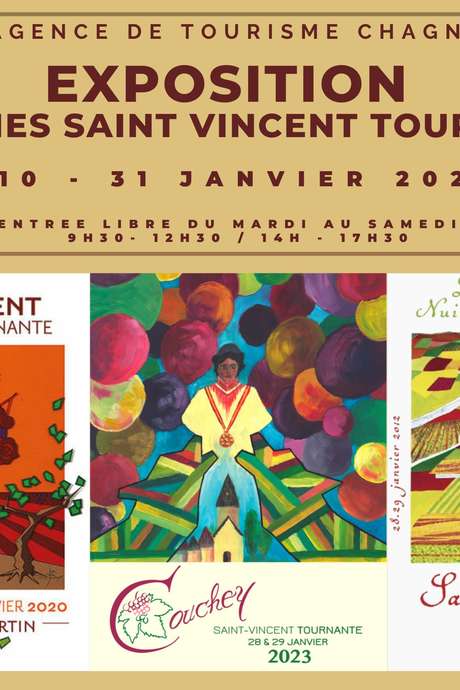 As in Asterix, it always ends with a banquet, but let's go back to the beginning...

First there is a village and volunteers who have worked all year long to put on a celebration that may not come back for 30 years. All the generations get involved to highlight the heritage of the village, anticipating the pride of welcoming people from near and far. But let’s set the stage: it's a bit like theatre, there are "scenes" which are repeated year after year, but which people adore: an array of multicoloured banners fluttering under the winter sun, thousands of garlands of colourful flowers, grapes overflowing the harvest baskets and vintage wine-making equipment that recalls the work of winegrowers in a landscape of sleeping vines – welcome to Saint Vincent!

After mass, people watch the impressive parade of saints that rivals the most wonderful Pardons of Brittany, no less than 80 brotherhoods! Finally, the prestigious Brotherhood of the Knights of the Tastevin, whose rituals are inspired by the last orders of chivalry of the court of Burgundy, thanks the former and current winegrowers, sometimes very moved, by inducting them... Your glass, the Holy Grail

At the end of the morning, the tasting cellars are open, but you can only access them with the Glass of Saint Vincent. Different every year, chosen to enhance the tasting, it is etched with the coat of arms of the appellation and accompanied with its tasting tickets. You can then taste the wines of several vintages and sometimes a "special Saint Vincent vintage" made for the occasion. Take the opportunity to chat with the growers, and don’t forget that this festival is an opportunity for them to promote their appellation and a method of viticulture defined by the all-Burgundy notion of ‘Climat’. A ‘climat’ is a parcel of vines that has its own personality, history and, above all, a unique taste, waiting for you to discover it! Oops ... noon already and the great outdoors has made you hungry...

Fortunately, between tastings, you can enjoy a good, simple meal, and though it may not quite be a roast-pig banquet, the stalls spread around the four corners of the village will treat you to local products: snails, marbled ham, beef bourguignon. Depending on the village, a gourmet banquet is offered (sometimes with the help of the numerous Michelin-starred chefs from the region) for lunch or dinner with Burgundy music and folklore songs, popular and good-natured. A village celebration also means musical groups, exhibitions and events so you can learn more about the wines and the work out in the vines. At the end of the afternoon, after a full tour of the village, take the opportunity for a stroll – there’s always a little vineyard path on a hillside where you can work off the extra calories. Far from the tumult of the village, the winter landscapes are as peaceful as they are sumptuous, and who knows, you may be lucky enough to catch a sunset!

One week before the great Saint Vincent Tournante, each year the wine makers of Beaune organise festivities with tastings of their wines and a banquet in the impressive bastion of the Hospices de Beaune.
The tastings of Saint Vincent de Beaune will take place on Saturday January 22, 2023, the day of the celebration of the patron saint of winegrowers!