Scroll
-A +A
Home / Tasting / Local Products / Burgundy Snails - Escargots de Bourgogne
A symbol of the gastronomy of Burgundy and France, the snail is a little animal that’s as delicious as it is fascinating !

The snail: On the menu for thousands of years

Eating snails goes back to the origins of mankind, as evidenced by the presence of shells in prehistoric inhabited caves. It was a popular dish among the Romans who ate them fried. Considered "unclean" in the Middle Ages by the Church, their consumption tended to die out. Snails became a food reserved for times of famine. In Charente, in the 16th century, sailors took barrels on board containing snails in order to have a reserve of fresh food for the crossing.

The scientific name of the Burgundy snail, also called the "Big White" or "Vineyard Snail", is Helix Pomatia. Its extensive harvesting during the first half of the 20th century, combined with agricultural practices and management of public spaces, led to the species becoming rare. Thus, since 1979, they became subject to special protection. Harvesting is therefore prohibited in France during the breeding period from 1 April to 30 June. Burgundy snails are an iconic dish of Burgundy and French gastronomy. Mainly consumed at Christmas celebrations and family meals, they are generally prepared according to the traditional recipe. Cooked in court bouillon, the snail is then presented in its shell, which is filled with a mixture of butter, parsley and finely chopped garlic and placed in the oven.

You can taste Burgundy Snails, delicious with a glass of dry white wine with a touch of minerality (eg a Burgundy Aligoté or Chablis), in specialist establishments such as "Hélice-l’Escargotier Beaunois" or numerous restaurants in and around Beaune. 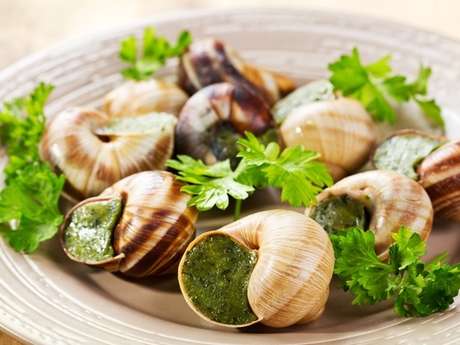